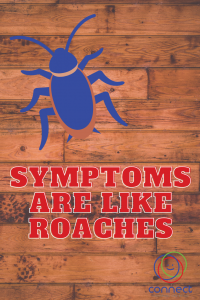 Did you know that roaches have been around for millions of years, and it is suspected that there are thousands of species worldwide? They are resilient and persistent critters that tend to infest homes during the cold winter months. Often, they are found in basements and other lesser used areas of a residence. Most people do not have a fond admiration for these intrusive insects, and for a good reason. Not only do they hiss to warn off predators, but they release allergens and readily spread diseases. Unfortunately, they gather and multiply long before being discovered in their warm, dark environments. One becomes two, and two become a small army that is a force to be reckoned with. One running joke is that a roach could even survive a nuclear bomb!

Believe it or not, roaches are similar to the mental health symptoms you endure. I know it sounds like a stretch but stay with me. Symptoms, like roaches, thrive in deep darkness. The anxiety, depression, eating disorder, addiction, shame, or any other mental health concern encourages you to befriend secrecy. It tells you lies, such as “no one would like you if they knew your struggles” or “you will prove to be a disappointment to those around you if your issues are seen.” It says that you should stay quiet and isolated. Symptoms often instill fear and disgust, just like roaches. Except this kind of fear and disgust is inward. The messages sent appear to be of sound mind, but they are actually cruel lies intended to foster a vicious cycle of pathology.

Also similar to these pests, symptoms will thrive and take over before you know it. In no time, both will cause harm and take control of the foundation they inhabit. Destruction ensues and can easily become a rampage. However, just as a home should not be overrun or defined by pests, neither should you. A home contains rooms where people gather, dining spaces where loved ones eat, bedrooms where you dream, and spaces where memories are made. You contain morals, character, values, strengths, and love. All of this is despite the issues within.

What happens when you spot a crowd of roaches and shine a light on them? That is right, they scatter. They are afraid of being exposed, so they divide and lose the strength in numbers. Your symptoms are the same way. While left in the darkness of secrecy they are strong and daunting with the power of the unknown. However, when exposed for what they are, you find liberation from the pests. They no longer control you; you control them. You are able to now put a leash on the roaches and “name it to tame it.” At the end of the day, it is none other than yourself who is wielding the light and leash. You are the one who gets to exterminate or domesticate the roaches. You get to share your experience with others and find support in those around you. Others will begin to realize they are not alone in their infestation as well and that a connection can be formed. Hope is born and pathology weakens. So, I leave you with a few inquiries. Are you housing these metaphorical roaches? Are they growing in strength and number? If so, are you ready to make them scatter by shining the light of your truth on them? I encourage you, let your light shine and explore the dark depths within. As Brene Brown stated ever so eloquently:

“The dark does not destroy the light; it defines it.